Yesterday the Rock and Roll Hall of Fame announced Patti Smith inducted into the Hall of Fame in 2007. "Hey sister, you just movin' too fast, You screwin' up the quota” Congratulation Patti!
Below is an interview from the Summer of 2005 issues of Green Pages – enjoy.


Patti Smith reaffirms that people have the power
By Deyva Arthur
Green Party of New York State
Patti Smith is most known for pioneering the music scene, starting in the 1970s with her own style of poetic folk-punk, as in albums like Horse and Easter. She is a two-time Grammy Award nominee and is considered one of the foremothers of current music.

Smith has also been paving the way among the freethinkers of political activism. Enrolled as a Green since Ralph Nader ran in the 2000 presidential race, she has been outspoken in endorsing the ideals of the Green Party of the United States. 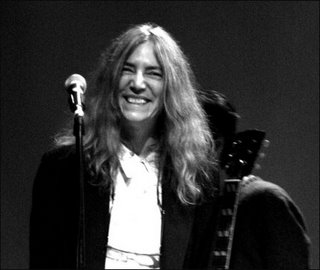 
Coming back for a brief stint to New York from work in Italy to tour with Ralph Nader, Smith is singing out against the war on Iraq. She gave an interview for Green Pages in April at an Albany, N.Y. rally with Nader sponsored by the Capital District Greens.
Green Pages: Which came first, the music or the politics?
Patti Smith: As a child I was attracted to people [who] helped others, to our spiritual leaders and the work of Albert Schweitzer. So I would say it's not really politics that attracted me; I am not really politically oriented. Rather, it is humanistic issues, whether coming from the Dalai Lama, or environmental issues or the late pope against war. Ralph Nader's activism, in every sense of the word, is what attracts me. I gravitate towards people and ideology that is earth- and people-friendly.

GP: What made you become a Green?

PS: I probably met somebody on the street, and they signed me up. I'm really an independent person. I go where there is good, no matter where it comes from. Also I do a lot of work in Europe where the Green Party is really strong, like in Germany.

PS: Everybody has their woes, you know. I try not to compare situations, but America is such a big country. It is harder sometimes to get a sense of unity, where in a smaller country you get a stronger concentration of people, so it has the feel of being stronger…. One thing technology will help in a positive way in the future is to link people everywhere together.

GP: In what direction do you think the Green Party in this country is going?

PS: I'm not a political organizer, so it wouldn't be appropriate for me to predict. You need strong leaders, people who can speak and comprehend local issues. One has to be careful not to get caught up in politics, which is a dirty and difficult game, and become discouraged. Ralph quoted someone in saying, "Democracy is something worth losing for over and over and over again. You lose the fight until you win." There are certain issues, the anti-war movement and the environment, that are worth losing over and over until we break through…. I would say to the third party, one has a difficult road ahead and…don't give up just because you're going to lose, or there is not much recompense. One almost knows they are going to lose. When we marched against the strike on Iraq, I knew it was not going to make any difference, but I was determined to show and be counted. I wanted our government to know how I felt. So that is my thorn-in-the-side philosophy. You just have to keep poking until it bleeds.

GP: Do you integrate your politics into your music?

PS: I'm not an entertainer so to say. I don't rally care about my career. I just want to do good work, and incorporating Ralph's teachings in all our performances is part of doing good work.

GP: Thank you for doing your part. As an aside, the Green Party in New York is looking for a candidate to run for governor in 2006. They need 50,000 votes to regain ballot status. Would you consider running?

PS: That is quite an honor, but I really don't think that I am qualified to run for governor, and I have a lot of responsibilities. But if you want a governor in the future, let my daughter get a little older. She is the one; she is your future right there.
Posted by Jason Nabewaniec

Loading...
Greens!
Not Republicans
Not Democrats
The Green Party is a political party completely independent of the two major corporate parties. We run our own candidates and accept no money from corporations.

Real Values
The Green Party is a values-based political party that represents real people’s interests, needs, and ideals. Greens are in this business to improving people's lives working to guarantee a safe, healthy world for our children, grandchildren, and future generations.

Anonymous comments to posts that are not constructive will be deleted without regret.